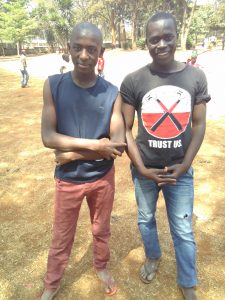 Young people’s issues are on top of everyone’s agenda this week in Kenya. A survey of more than 4,000 young Kenyans aged 15-24, found that their top three concerns were:  unemployment, financial hardship, and drug/alcohol abuse.

Add to this another challenge in Mathare, where Tushinde works – some of the highest levels of police killings and gang crime in Kenya, as you might have read in this week’s Economist.  The Mathare Social Justice Centre, a partner of Tushinde’s, was driven to produce a gruesome publication compiling the killings by police or unidentified assailants of young men.

I went to visit Tushinde holiday camps this week with a friend. The most impressive thing that hit both of us was talking to 15 year olds who said the holiday camps provided alternatives to smoking bhang, joining gangs or ‘being idle’. My friend was inspired to write an article for the Star Kenya about this. 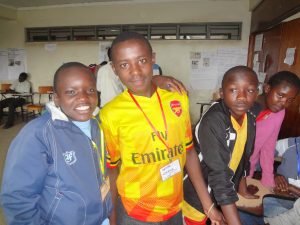 Violence and Conflict in Kenya

I work on violence and conflict in Kenya. There are many causes, and it’s a complex problem. For youth, it’s fundamentally rooted in deep inequality, security force abuse, and poor economic opportunities for the 1 million new entrants to the Kenyan labour market each year. Young people are strikingly entrepreneurial and optimistic about the future, which is why I love living here. But the economy isn’t delivering for them and they can’t rely on limited government social services.

There is an urgent need for Tushinde’s boys clubs and holiday camps which provide diversions, education top ups and life skills for young people. These days young men often get overlooked, and this is my particular interest. As a well- known rapper said yesterday ‘we young men are stressed’ – this got applause amongst a crowd of young people.

I am donating to support the boys clubs and Tushinde’s holiday camps in the long term and I very much hope others will do too. For as little as £5 per month you could support a child to attend a monthly boys club. This helps prevent Mathare’s teenage boys from joining a ‘lost generation’ and realise their potential.

Receive regular updates and news on charity events and opportunities on how you can help Tushinde thrive.