Mathare Valley is five kilometres from the centre of Nairobi and home for over 300,000 people (UN Habitat). Kiambiu is a strip of unclaimed land between the Kenya Air Force base and the Nairobi River.

The majority of the inhabitants in both areas are thought to be under 30 years old. HIV prevalence in adults is estimated at between 6% and 21% (Govt. Kenya 2018) and as many as 57% of the child population are believed to experience malnutrition at some point in their childhood (UNICEF 2012) Unemployment is estimated to be around  80%; even those in work have very poor job security.

The informal settlements consist of roughly constructed mud, tin or wooden one-roomed huts with no electricity and no sewage system. Access to water is usually from a single shared tap, typically serving 100 dwellings. The average population per hut is eight persons.

Although Kenya has implemented free primary education since 2003, many school-aged children remain out of school or drop out too early, especially in slum areas where fewer public primary schools are available. Cost of uniforms, textbooks, examinations and remedial class fees also keep primary education out of reach of many vulnerable children.

Access to medical care is also a great challenge; most public health centres are overcrowded and apply ‘’informal fees’’; in addition, drugs remain expensive and unaffordable to the poorest. The same applies to large public hospitals in Nairobi.

There are only three official clinics serving the estimated 150,000 people living with HIV/AIDS in these settlements; two are run by international organisations, one is run by the Kenyan government. Only two of these clinics can be accessed by non-HIV positive people for general treatment. A feeding programme provides a daily meal and nutritional supplements to some of the eligible population. These services are free but do not cover more serious conditions or hospital admissions. 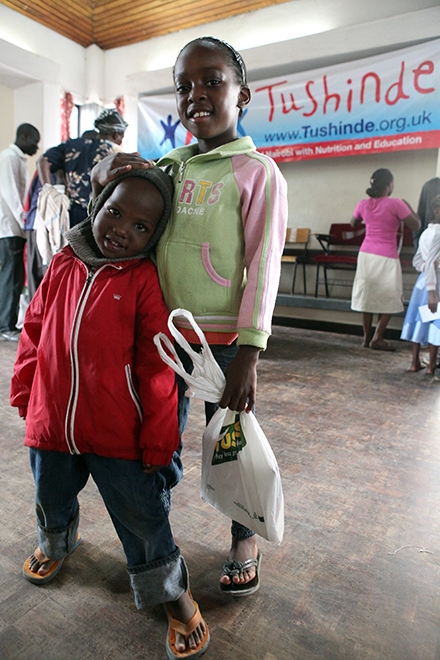 We work with local clinics and schools to provide an extensive outreach programme.

This helps to ensure that we get to the most vulnerable of children. When we take a child on to our books, the life of that child is in turmoil; he or she might be mourning the death of a parent and living with the extended family or perhaps the whole family has been evicted and have nowhere to sleep that night.

These children have multiple problems.

It won’t just be HIV in the family; over 70 % of the families we work with are affected by HIV/AIDS, there will be other issues such as malnutrition, mental health problems and dangerous debt. We work with up to 500 children in 160 families. Very often the caregiver is an aunt, grandmother or even a neighbour who has taken in children who have lost both their parents. 18 % of the children we work with are double orphans and 70% live in a single-headed household.

We help these families during their crisis and then we work with them in the long term to create a safe, nurturing and stable environment for the children.

We currently work in two of Nairobi’s informal settlements, supporting over 500 of the most vulnerable children between Mathare and Kiambiu. Tushinde has worked in Mathare since it’s founding in 2010 and started work in Kiambiu July 2018. The Kiambiu informal settlement is located south of Mathare Valley and home to around 50,000 residents. Being one of Nairobi’s newer slums there are less NGO’s working in Kiambiu. Continuing to further our work here is important to our mission of leaving no child forgotten.